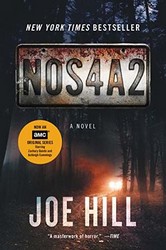 Victoria McQueen has a secret gift for finding things: a misplaced bracelet, a missing photograph, answers to unanswerable questions. On her Raleigh Tuff Burner bike, she makes her way to a rickety covered bridge that, within moments, takes her wherever she needs to go, whether it’s across Massachusetts or across the country.
Charles Talent Manx has a way with children. He likes to take them for rides in his 1938 Rolls-Royce Wraith with the NOS4A2 vanity plate. With his old car, he can slip right out of the everyday world, and onto the hidden roads that transport them to an astonishing – and terrifying – playground of amusements he calls “Christmasland.”
Then, one day, Vic goes looking for trouble—and finds Manx. That was a lifetime ago. Now Vic, the only kid to ever escape Manx’s unmitigated evil, is all grown up and desperate to forget. But Charlie Manx never stopped thinking about Victoria McQueen. He’s on the road again and he’s picked up a new passenger: Vic’s own son.

NOS4A2 is a tale of two people, massively different in every possible way, yet destined for a collision course due to their unique abilities.
There are different worlds, the regular world, and the world of inscapes, the world of the imagination. Not everyone can access these worlds, and they’re different for everyone.
For Vic McQueen, she has the unique ability to find lost things via a covered bridge that appears only for her, so she can go where she needs to.
For Charlie Manx, he has Christmasland, more on that soon.
There are apparently others with talents too, and they’re all harnessed through different things.
Vic‘s ability first comes to light when, as a young child out riding her bike and thinking about her mother’s lost bracelet, she rides across the Shorter Way bridge and emerges in a completely different location. Later on, her childhood bicycle is replaced by a motorbike.
Manx owns a classic Rolls-Royce Wraith, which not only allows him to access Christmasland, but drains all the goodness out of its passengers as fuel for the journey. Manx long ago left anything good in himself behind, and so he needs passengers. As they are drained, Manx seems to take on some of their vitality, becoming younger as time goes on.

NOS4A2 starts out with a spooky, eerie air, but also adventure as the young Vic discovers her power for finding lost things, and the story picks up pace as years go by and Manx threatens Vic’s family, deciding that a fair exchange for her telling tales about him and getting him incarcerated, robbing him of his family (his own daughters are in Christmasland, and they’re happy to see him when he returns), is to repay her in similar fashion by taking Vic’s son from her and introducing Wayne to the Christmasland kids.

It’s immersive and detailed with great world building, particularly with Vic’s magical covered bridge, right down to the bats that reside in the roof space and the way the bridge degrades over time. There’s also the playground of Charlie Manx, Christmasland, with it’s reindeer-go-round, enormous Christmas tree festooned with unique decorations and the Sleighcoaster. Christmasland where every day is Christmas and party games include Scissors for the Drifter and Bite the Smallest. Warm and cosy it is not, but the residents seem to enjoy the place.

On to the characters surrounding our two leads. First, the good…

Lou Carmody is wonderful. When Vic stumbles into him whilst fleeing for her life he accepts it without question, hauling her onto his motorbike and riding away from danger. He’s heroic but in a quiet way. Lou is steady, dependable, trying his best to be a good father to Wayne, and to support Vic through her trials, and they are many. His faith in her, even when what she’s saying seems impossible or incredible, is unwavering.

Maggie Leigh, friend and fellow person with unique skills (courtesy of a unique set of Scrabble tiles) is the Here, Iowa librarian who Vic meets in her earliest travels across the bridge and who returns when it’s apparent that Manx may not be gone after all. She’s a tragic character who seems to have a lot of hardship and hurt in the years between her first and second encounters with Vic, and I would have enjoyed more glimpses into the years that separated their encounters.

And now for the bad…

Bing Partridge is a disturbed individual long before he becomes enthralled with Charlie Manx and Christmasland, and this only gets worse with the promise of Christmasland dangled before him by Manx. If he just does the things that Manx asks, then he’ll be able to visit this land of magic and wonder, so he thinks. He is truly monstrous with his basement of horrors, and has no redeeming features at all. For all that Manx is a bad ‘un, and he really is, Bing is skin-crawling.

As a reader of Stephen King I enjoyed the nods to other works including the Dark Tower series and IT. As if Manx wasn’t scary enough, the idea that he possibly knows of Pennywise or The True Knot from Doctor Sleep… I’ll leave that thought there.

I’ve enjoyed a number of books by Joe Hill now and NOS4A2 is another one to add to the list. It’s a book that languished on my TBR list for far too long.  I wish I hadn’t waited because what a book it is. For a pretty long book it never felt too drawn out.   Time spent with these characters made me root for Vic, for her desperate attempt to save the life of her son, and to hope that she triumphed over the threats against her family.  I can’t say more about whether she does win through in the end, you’ll just have to pick up the book to find out.