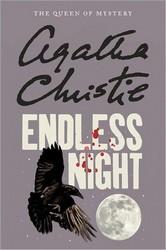 Agatha Christie’s disturbing 1960s mystery thriller, reissued with a striking cover designed to appeal to the latest generation of Agatha Christie fans and book lovers.
Gipsy’s Acre was a truly beautiful upland site with views out to sea – and in Michael Rogers it stirred a child-like fantasy.
There, amongst the dark fir trees, he planned to build a house, find a girl and live happily ever after.
Yet, as he left the village, a shadow of menace hung over the land. For this was the place where accidents happened. Perhaps Michael should have heeded the locals’ warnings: ‘There’s no luck for them as meddles with Gipsy’s Acre.’
Michael Rogers is a man who is about to learn the true meaning of the old saying ‘In my end is my beginning…’

I think I went into this expecting something a little different than I got, and that probably affected my enjoyment. Reading the description, which was different than the one I’ve included above, I mistakenly thought there’d be a house, an old place with character into which our characters would move unsuspectingly and then the creepiness would begin. That’s not what happens at all. And I sort of hoped for the house.

This is a tale narrated by Michael Rogers, a young man who dreams of a house of his own, a dream house, and his perfect companion with which to share his dream and his life. He recounts, in a very conversational fashion, meeting Ellie, their love for each other, their marriage and the purchase of a plot of possibly cursed land. There is a house, eventually, but it’s not an old, creepy house; the ruins of a previous residence are actually removed and a new dream home is constructed under the supervision of Michael’s architect friend Rudolf Santonix.

There’s certainly an air that something is not right, and many intriguing characters, from Santonix the architect, to Ellie’s good friend and companion Greta, and that kept me reading even as I realised this wasn’t going to be the kind of story I thought at the outset. The pace picked up for around the last quarter of the novel as the truth came to light.

It’s hard to say too much without risking spoilers but I will say that there was such an air of something not right about a certain situation that I questioned a lot of what was going on and I did suspect at least one thing. When the revelations finally came I was partially right but had suspected so much that the main surprise wasn’t such a great shock. The signs were there, although I was surprised at the depth of it all. Also, trying to be vague here, a similar thing had happened elsewhere in another novel, and that time it definitely got me, it was marvellous. Here, I didn’t have that same sense of amazed disbelief.

Endless Night probably isn’t going to be one of my favourite Christie novels but I’ve enjoyed quite a few now so it was inevitable there’d be one I enjoyed less. I am hopefully going to read Halloween Party soon as October is upon us, and I’m looking forward to that.

Follow Pages And Tea on WordPress.com
Join 1,206 other followers