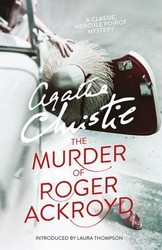 In the village of King’s Abbot, a widow’s sudden suicide sparks rumors that she murdered her first husband, was being blackmailed, and was carrying on a secret affair with the wealthy Roger Ackroyd. The following evening, Ackroyd is murdered in his locked study–but not before receiving a letter identifying the widow’s blackmailer. King’s Abbot is crawling with suspects, including a nervous butler, Ackroyd’s wayward stepson, and his sister-in-law, Mrs. Cecil Ackroyd, who has taken up residence in the victim’s home. It’s now up to the famous detective Hercule Poirot, who has retired to King’s Abbot to garden, to solve the case of who killed Roger Ackroyd–a task in which he is aided by the village doctor and narrator, James Sheppard, and by Sheppard’s ingenious sister, Caroline.
The Murder of Roger Ackroyd is the book that made Agatha Christie a household name and launched her career as a perennial bestseller. Originally published in 1926, it is a landmark in the mystery genre. It was in the vanguard of a new class of popular detective fiction that ushered in the modern era of mystery novels.

My love for Agatha Christie and Hercule Poirot is still fairly new. I’m working my way very slowly through the Poirot novels and The Murder of Roger Ackroyd, well, it’s left me a little lost for words actually.
I did not see that coming! You know the sort of twist that makes you see the whole thing in a totally different light, and almost sends you zipping back to the beginning to read the whole book again? This book has that twist.
It’s certainly put me on my guard for future Christie reads, but I doubt that will do me any good – I don’t think I’ve actually worked out the identity of the killer in any that I’ve read so far, and I wouldn’t have it any other way, because that’s Poirot’s job..

Poirot. I still like him. He’s self-assured, pompously certain of his own miraculous crime-solving skills, and it may become insufferable if he wasn’t always so very right. Nothing gets past the great detective, nothing! He has a certain charm about him, a way with words and manners that is a joy to read and watch as people talk to him and end up revealing more than they maybe intended to.
There’s a comic air about him that makes him endearing, such as his entrance in this novel – lobbing a vegetable marrow over the fence into his neighbour’s garden, where it almost hits Dr. Sheppard who is outside in his own garden at the time. And so these two new neighbours and eventual crime-solving team meet for the first time, after some speculation that Poirot is actually a retired hairdresser.

Sheppard himself narrates this tale, which obviously centres around the murder of title character Roger Ackroyd. He serves almost as the replacement Hastings, going along with Poirot to investigate, trying to work out what the great man is thinking, and failing at every turn.
He has a sister, Caroline, local gossip and general nosy neighbour, who has her domestic network of investigators, from maids to friends to bar staff to cleaners. It’s amazing that this small community can’t actually solve the murder without Poirot’s help!

I don’t want to say too much more because the last thing I want to do is spoil this book for anyone who hasn’t had the pleasure of reading it yet. A crime is committed, there are many suspects, and many colourful characters with many hidden secrets, and all you need do is sit back and watch Poirot at work. Twists, red herrings, suspicions, all add to the narrative, but the ending is what makes the book. It’s a solution that I doubt I’m ever likely to forget…

17 thoughts on “Book Review: The Murder of Roger Ackroyd (Poirot #4) by Agatha Christie”