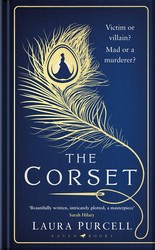 The new Victorian chiller from the author of Radio 2 Book Club pick, The Silent Companions.
Is prisoner Ruth Butterham mad or a murderer? Victim or villain?
Dorothea and Ruth.
Prison visitor and prisoner. Powerful and powerless.
Dorothea Truelove is young, wealthy and beautiful. Ruth Butterham is young, poor and awaiting trial for murder.
When Dorothea’s charitable work leads her to Oakgate Prison, she is delighted with the chance to explore her fascination with phrenology and test her hypothesis that the shape of a person’s skull can cast a light on their darkest crimes. But when she meets teenage seamstress Ruth, she is faced with another theory: that it is possible to kill with a needle and thread. For Ruth attributes her crimes to a supernatural power inherent in her stitches.
The story Ruth has to tell of her deadly creations – of bitterness and betrayal, of death and dresses – will shake Dorothea’s belief in rationality, and the power of redemption.
Can Ruth be trusted? Is she mad, or a murderer?

I enjoyed The Silent Companions so much that I was really looking forward to reading Laura Purcell’s next book, and The Corset didn’t disappoint. It was very different to her first novel, but still so readable. I think sometimes it’s the writing that draws you in straight away, and I do enjoy the way Purcell writes. This tale is atmospheric and intense, and very sad in parts too.

The Corset follows two main protagonists. Dorothea Truelove is a young lady of adequate fortune and circumstance that she can occupy herself with ‘good projects’ and charitable acts. She is intelligent, and fascinated by the ’science’ of phrenology, and so combines her good intentions with an urge to gain scientific information.
She visits women in New Oakgate prison and it is here that she meets with alleged murderer Ruth Butterham. She listens as Ruth spins a fantastic yarn; she’s imprisoned for one murder, but to hear her own ideas she has actually killed far more than that, and not via any regular method, but through the ill-will that occupied her mind whilst she stitched clothing items for these people.

Ruth’s tale is fairly dark. There’s deprivation, poverty, disappointment right from the earliest memories, and these lead on to bereavement and cruelty. Her life has been hard, and she evokes sympathy in the reader despite her current situation. She’s apparently done something terrible, and she has been surrounded by people who commit equally despicable acts.
The idea that some supernatural element is at play that allows Ruth to exercise a destructive power simply through thoughts and stitches, well, it makes you wonder whether she really has done the things she claims, and Dorothea herself tries to remain incredulous whilst getting swept along by the idea that maybe Ruth does have some influence via her stitching after all.

Dorothea is equally as intriguing, although her story is far less brutal. She is a woman of her time; her father aspires to find her a suitable match so she can marry, but her heart lies elsewhere, and she hides her true feelings for fear of the outcome.
She is fascinated by phrenology, the study of the human skull and the idea that certain traits can be mapped out in certain areas. She wants to prove that behaviour can be anticipated via this method of examination and therefore changed. It’s the idea that drives her to the prison in search of people with criminal pasts so she can study their heads.

Through beautiful writing both these characters and their surroundings come to vivid life on the page, and I was soon absorbed in the dark tale being woven during Dorothea’s visits to Ruth in prison. There’s a great uncertainty to what has actually happened, and whether Ruth really does have supernatural power or whether something else is going on.
And when things start to happen that Dorothea cannot account for, Ruth’s claims start playing on her mind, all adding to the sense of the surreal. Is Ruth a young woman with a troubled mind after all she’s experienced, or does she have power?

A colourful cast of supporting characters surround these two very different women, and they all add to the tale, contributing a vast range of kindnesses and cruelties depending on which narrative we’re following.

I’ve enjoyed both of Laura Purcell’s novels, and they’re both so very different that I cannot wait to see what she comes up with next.

9 thoughts on “Book Review: The Corset by Laura Purcell”