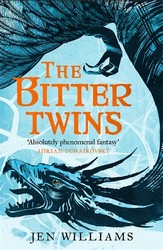 The Ninth Rain has fallen, the Jure’lia have returned, and with Ebora a shadow of its former self, the old enemy are closer to conquering Sarn than ever.
Tormalin the Oathless and the Fell-Witch Noon have their hands full dealing with the first war-beasts to be born in Ebora for nearly three hundred years. But these are not the great mythological warriors of old; hatched too early and with no link to their past lives, the war-beasts have no memory of the many battles they have fought and won, and no concept of how they can possibly do it again. The key to uniting them, according to the scholar Vintage, may lie in a part of Sarn no one really believes exists, but finding it will mean a dangerous journey at a time of war…
Meanwhile, Hestillion is trapped on board the corpse moon, forced into a strange and uneasy alliance with the Jure’lia queen. Something terrifying is growing up there, in the heart of the Behemoth, and the people of Sarn will have no defence against these new monsters.    – from Goodreads

How exciting to be back in the brilliantly imagined world of The Ninth Rain. Yep, you definitely need to read that book first to make sense of what’s going on in The Bitter Twins (and it’s a great tale anyway, not one you’d want to miss out on). The Bitter Twins picks up in the aftermath of several huge events that closed The Ninth Rain.

Being back in the company of old favourites is great and they’re all here – Noon, Tor, Vintage, Aldasair. And Hestillion. Oh Hestillion, what have you done, and what are you doing now?!?! I wouldn’t have called Hestillion a favourite as I picked up this book, and I’m not really sure that’s the right word now, but her storyline was so tense, and some of her choices so shocking that it made for great reading. So many of her choices left me wondering what could possibly happen next and if/how she could ever get out of the awful situation she finds herself in, or even if she would want to.

There are some great new characters too, including Eri, a young Eboran boy with a tragic past, and two Eborans long forgotten, who kept me guessing for most of their narrative. I didn’t trust them from the early stages, but was that with good reason?
Others appear in the guise of allies, but can they really be trusted?
Nanthema plays a bigger part this time around too as she tries to adapt to a world that has experienced 20 years of change, all of which she missed out on. There was a certain sadness to her relationship with Vintage. For Eboran Nanthema 20 years is very little of a life, whereas for human Vintage it’s a massive change, and of course it changes the dynamic between them.

I love Vintage. She doesn’t have magic or super strength or a war-beast with which she has bonded (yet, but can you imagine how amazing that would be?!), yet she faces every situation, no matter how great the odds against her seem, with determination, intelligence and a positive attitude. She’s a scholar, but she’s also handy with a crossbow in the face of deception, betrayal and monsters.

I have to mention the war-beasts. I could read a whole book devoted to their antics. Not the fabled warriors of old, capable of fending off attack from the Jure’lia and saving Sarn, these beasts have no root-memories. They cannot recall their past exploits and triumphs, or their links to each other. They’re new, and trying to learn how to be what everyone has their hopes pinned on.
I loved all the different characteristics and personalities, from Kirune the big cat who teams up with Tor, to Helcate, the sweet little beast who befriends young Eri.
Vostok is a dragon, and the only one who does recall the great history of the war-beasts. She knows what they were, and knows what they must become if they’re to fight as they did in times gone by.

This book has it all…
Great settings, both old and new. I loved The Nest, the place the war-beasts of old had lived and I could have spent more time there as the new war-beasts tried to find something of their old selves within the walls.
There’s a mystery concealed within a tablet of amber which inspires a great, dangerous quest across the Barren Sea where shocking revelations await.
And as the Jure’lia ships become operational we see the inner workings of these enemies to Sarn and the way they operate. There are epic battles which mostly take place in the sky as the Jure’lia recover their ruined Behemoths and the war-beasts fly to take on this threat.

The Bitter Twins kept me riveted to the page. A book of over 600 pages would usually take me a long time to read, but I found myself reading 100+ pages at a time because I just couldn’t put this great big book down. You become so invested in these characters and their fates, and as they’re all off on different adventures for the most part it makes for compelling reading as you just have to know which viewpoint the next chapter follows and what happened to Tor/Vintage/Noon et al after the latest mini cliff-hanger.

The story builds to an epic battle of a conclusion and I am really looking forward to finding out how all this is going to end after so many twists and revelations, even though I will be sad to leave these characters behind once it’s over and I wonder if all my favourites will survive now that the war of the Ninth Rain is really getting started. Great read!

10 thoughts on “Book Review: The Bitter Twins by Jen Williams”