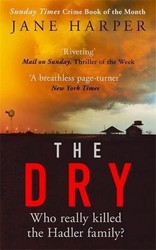 WHO REALLY KILLED THE HADLER FAMILY?
I just can’t understand how someone like him could do something like that.
Amid the worst drought to ravage Australia in a century, it hasn’t rained in small country town Kiewarra for two years. Tensions in the community become unbearable when three members of the Hadler family are brutally murdered. Everyone thinks Luke Hadler, who committed suicide after slaughtering his wife and six-year-old son, is guilty.
Policeman Aaron Falk returns to the town of his youth for the funeral of his childhood best friend, and is unwillingly drawn into the investigation. As questions mount and suspicion spreads through the town, Falk is forced to confront the community that rejected him twenty years earlier. Because Falk and Luke Hadler shared a secret, one which Luke’s death threatens to unearth. And as Falk probes deeper into the killings, secrets from his past and why he left home bubble to the surface as he questions the truth of his friend’s crime.     – from Goodreads

I fancied a change with my latest read, so, having received many recommendations for The Dry and seen it in many top ten lists for a while now, I decided to give it a go.
What a page turner! I couldn’t seem to put this book down. It was always ‘I have time for one more chapter, don’t I?’. And if I didn’t, that didn’t always stop me carrying on reading anyway!

The Dry is set in a small town in Australia, Kiewarra, where there hasn’t been rain for two years and the land and community are suffering. Tensions are already running high before the shocking revelation that three members of the Hadler family are dead in an apparent murder/suicide.

The atmosphere, both the oppressive and relentless heat, and the claustrophobia created in a town where everybody knows everybody else, and secrets don’t always stay hidden, makes for compelling reading.
The way the town bands together, and the lengths they will go to once they believe something to be true creates a tense situation.

Into this comes Aaron Falk, a man who twenty years previously felt the force of the community as he and his father were forced to leave after his suspected involvement in the death of one of his friends. His return causes a stir; inevitably he is not welcomed by everyone, and several attempts are made to make the general feeling known.
He returns after hearing of the Hadler family’s case, as Luke Hadler was also a friend years ago.

Thankfully not everyone is so hostile, and Falk finds a friend in local police officer Raco, who is also convinced there is more to the Hadler case than has been revealed so far.

There are many twists in The Dry, and enough potential suspects to keep you guessing as to what really happened to the Hadler family throughout the book.
I liked the way the past and the present were immersed together, as there was also the old but not forgotten case of Ellie Deacon, the young girl found drowned, with whom Falk had been friends, and I kept wondering what had happened all those years ago. Through remembered scenes Falk’s youth and his friendship with Luke Hadler and Ellie Deacon comes to life.

I really enjoyed The Dry, and noticed that it is listed as Aaron Falk 1, so perhaps there will be more stories featuring this character and setting in future. If so, I’d certainly pick up another one, although the way this one ended was really good, and it definitely works as a standalone.

7 thoughts on “Book Review: The Dry by Jane Harper”