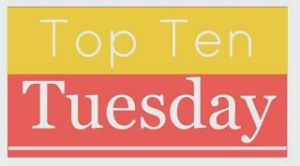 For this freebie week of Top Ten Tuesday I thought I would share with you a selection of the books I hope to read this coming year. Some of these books are yet to be published, some are already out there and just begging me to fit them into my TBR pile. Some are sequels, some are standalone, some are series-enders. There’s a little bit of everything on my list this week:

The Vanishing Throne by Elizabeth May – Sequel to The Falconer. The Falconer was one of the first books I read featuring the Fae and I really enjoyed it. I can’t wait to see how things play out in this latest instalment.

The Paradox by Charlie Fletcher – Sequel to The Oversight which featured fantasy and magic and was totally engrossing. Hopefully this book will provide more of the same and expand on the characters and stories developed in the first book.

Lair of Dreams by Libba Bray – Sequel to The Diviners, which was one of my favourite reads of last year. I was actually really glad I was late in finding out about this brilliant book, because it means I have less time to wait for the next book.

Finders Keepers by Stephen King – This novel features the characters first introduced in thriller novel Mr. Mercedes. I would read anything written by Stephen King to be honest, and I always look forward to something new from him.

The Chimes by Anna Smaill – This is a debut novel and it sounds like an intriguing dystopian, which is a genre I’d like to read more of this year.

The Little Flower Shop by the Sea by Ali McNamara – I really like the light-hearted nature of all the books I’ve previously read by this author, and this one takes place in Cornwall, which is a lovely location, so I’m hoping it will be like a breath of fresh air.

A Court of Thorns and Roses by Sarah J. Maas – I’ve developed a recent fascination with the Fae (I blame the Fever series by Karen Marie Moning and The Falconer by Elizabeth May) so this is definitely one I will be watching out for.

The Three by Sarah Lotz – When I bought Station Eleven this book came up in the ‘customers also bought’ section and I was hooked when I read the description and a few of the books I’ve really enjoyed were mentioned. It sounds exciting.

The Girl on the Train by Paula Hawkins – This thriller novel has just been released and it sounds pretty exciting.

Razorhurst by Justine Larbalestier – This sounds it might be similar to The Diviners, which is always going to be something which will catch my eye.

Pages and Tea has
read 11 books toward
their goal of
20 books.